A haplotype is a group of genes in an organism that are inherited together from a single parent.

A haplogroup is a group of similar haplotypes that share a common ancestor with a single-nucleotide polymorphism mutation.

Haplogroups pertain to a single line of descent, usually dating back thousands of years. When it comes to tracing the point of origin of Abraham's male ancestors biblical anthropologists are especially interested in males carrying R-M173 in modern populations. These populations which live in Africa, the Middle East, Europe and Eurasia comprise two subclades: R1a and R1b. Identifying haplotypes, haplogroups, and subclades is the work of molecular genetics.

Genetics has provided significant information about the point of origin of humans. It is agreed that the first humans lived in Africa. That is also where the oldest human fossils have been found. Among these archaic humans there was diversity of appearance, as is evident from studies of their anatomical structure.

Y-DNA is passed solely along the patrilineal line, that is, from father to son. The mtDNA is passed down the matrilineal line, that is, from mother to offspring of both sexes. Since neither recombines, Y-DNA and mtDNA change only by mutation at each generation with no intermixture between parents' genetic material. Molecular geneticists investigate when these mutations took place in the lineage they are studying.

L is the mitochondrial DNA macro-haplogroup that is at the root of the human mtDNA phylogenetic tree. As such, it represents the most ancestral mitochondrial lineage of all currently living humans. It is evident that all modern humans have ancestry that is traced to Africa.

New research based on study of fragmentary fossils suggests humans have come in different shapes and sizes since our origins over two million years ago. The great anatomical diversity found in humans today emerged much earlier than previously thought.

Molecular genetics has demonstrated that the notion of "race" is a false understanding of human populations. The term "race" does not appear in the Bible either. The Bible does not use the word race because that word represents a conception of human diversity which is untrue. All humans living today have African ancestry and from the beginning there was great diversity of appearance. Consider the example of the ancient Nubians, shown below.


The San Bushman are one of the oldest known people groups in the world and they have a yellow skin tone that we associate more with the Chinese. Recent genetic research has demonstrated that the ancestors of the Chinese came from Africa about 80,000 years ago.


There have been numerous movements of people out of Africa. This genetic study identified an "ancient trace" in Papuan genomes that indicates one movement took place as early as 120,000 years ago.

The movement of human populations out of Africa is especially evident when we consider Haplogroup R1b. This traces the Y chromosome DNA which is passed along the father's side. Y-DNA R1b is found in Africa, Southern Europe, France, and the British Isles. This dispersion took place over thousands of years, from about 80,000 to 8,000 years ago.

In the Bible, the Kushites are identified as one of the latter groups to disperse out of the Nile Valley. These people are identified with Kush (Cush), Noah's grandson. One of Kush's sons was Nimrod who established his kingdom in the Tigris-Euphrates Valley. Abraham was a descendant of Nimrod. 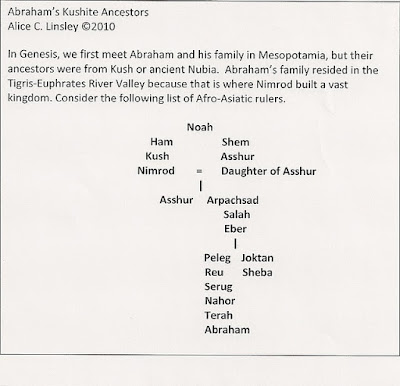 Both Lake Chad and the Upper Nile were populated by people in the R1b haplogroup. This haplogroup is usually regarded as European, rather than African, but it is both, as is evident from the map below showing the R1b distribution.


Haplogroup R1b, also known as haplogroup R-M343, is the most frequently occurring Y chromosome haplogroup in Western Europe, some parts of Russia (especially the Bashkir minority), Central Asia (e.g. Turkmenistan) and in the region of Lake Chad and along the Nile.

This is the haplogroup of Abraham's Proto-Saharan ancestors who dispersed widely and are identified in history as Kushites, Kushan, Ainu, Saka, Hittites, Horites, etc. Among them was a caste of priests known in ancient texts as 'Apiru, Hapiru, Habiru or Hebrew.

The English word "Hebrew" is equivalent to Ha'biru. The Habiru were already widely dispersed in the 14th-13th centuries B.C. Their spread was driven by their unique marriage and ascendancy pattern by which some sons were sent away to established their own territories.

Abraham's Habiru ancestors served at the archaic pillared temples built by the archaic rulers who are called "the mighty men of old" in Genesis 6:4. They are described as heroes and men of renown. They constructed temples, palaces, fortified shrine cities ("high places") and pyramids.

Related reading: The Bible and the Question of Race; Getting the Facts About Human Origins; Angelika Lohwasser, Kush and Her Neighbours Beyond the Nile; Matthew Adams, Manetho's 23rd Dynasty and the Legitimization of Kushite Rule Over Egypt; Who Were the Kushites?; Abraham was a Descendant of Both Shem and Ham