What is a Phoneme?

A phoneme is the smallest unit in the sound system of a language that can be identified as distinct from any other unit of sound. A phoneme is a minimal unit that serves to distinguish between meanings of words.

A pair of words like kátur and gátur that differ only in one "phone" is called a minimal pair.

Here are examples of the phonemes /r/ and /l/ occurring in a minimal pair:
rip
lip 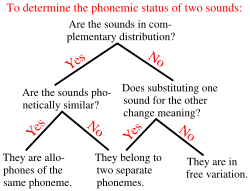 Email ThisBlogThis!Share to TwitterShare to FacebookShare to Pinterest
Labels: linguistics