The Sunlight Cycle in the Northern Hemisphere 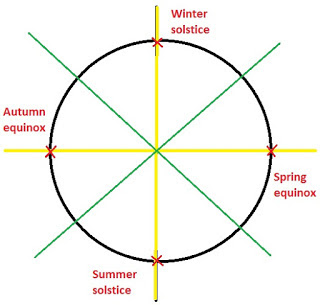 The Sun's cross marks the transitional points on the sunlight cycle in the northern hemisphere:

The Winter solstice occurs on December 21-22 in the Northern Hemisphere, and June 20 or 21 in the Southern Hemisphere. From the Winter Solstice, the hours of daylight lengthen again and the Sun is shown to be "the undefeated Sun" - Sol Invictus. In the ancient 12-division zodiacs, this is symbolized by the ostrich which hides its head for a time by lying flat against the ground, and after the Winter Solstice it begins laying its eggs. Some ancient zodiacs show a Man - "the Father of fathers" - as the sign of the Winter solstice.

Herodotus reported that there was an annual ceremony at Sais in Lower Egypt to commemorate the death and resurrection of Horus, who was called the son of God. The people mourned and beat their breasts in sorrow for the death of the Creator's son. An image of a golden cow with a golden sun between its horns was carried out of the chamber in which it stood throughout the year.

In Plutarch’s time a similar ceremony took place at the winter solstice. In this ceremony the golden calf was carried seven times round the temple. People placed oil lamps outside their houses and the lamps illumined the darkness throughout the night. This custom was observed throughout Egypt and in the Upper Nile regions.

The Spring equinox occurs on March 21-22 in the Northern Hemisphere and is the time when the day and night have equal duration. In the 12-division zodiacs, the animal totem that represented the Spring equinox was the Eagle or the Vulture.

The Summer solstice is the longest day of the year. It occurs on June 21-22 in the Northern Hemisphere. The ancient sign of the summer solstice was the lion.