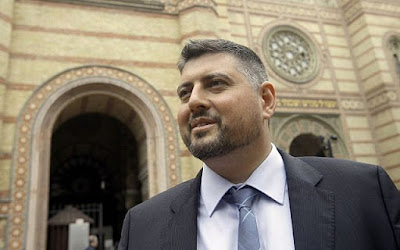 Here is an interesting story, told my Michael Cook, Editor of BioEdge:


One of the recurring themes thrown up by assisted reproduction is the importance of genetic ties. Are we determined by our origins, or can we forge our own identity? Does it matter whether our nearest and dearest are our kith and kin or whether they are just the people we hang around with?

By chance I just stumbled across the astonishing story of a Hungarian politician whose life was transformed when he discovered his true genetic identity.

By the time Csanad Szegedi was 24, he was vice-president of Jobbik, a far-right, nationalist and virulently anti-Semitic party. He was elected to the European Parliament as a Jobbik MEP in 2009 and wrote a book, I Believe in Hungary’s Resurrection.

Then he learned his family’s deepest secret: he was a Jew. His grandfather and grandmother were actually Auschwitz survivors.

Szegedi’s life fell apart. He was forced to resign from Jobbik.

Suddenly he did a complete about-face. Under the tuition of a Lubavitch rabbi from New York who was living in Budapest he became an Orthodox, observant Jew; he had himself circumcised, adopted the name Dovid and burned a thousand copies of his book. Now he is migrating to Israel with his wife and two children. He is interested in joining the Knesset.

Szegedi is obviously a complex, intense man. He could even be a charlatan. But his astonishing journey does suggest that there is something to the idea that our personal identity is incomplete if it lacks the genetic heritage.