Robert Runnels Williams was an American chemist who was born in India, the son of Baptist missionaries. His father designed and supervised the building of the Baptist church and seminary in Ramapatnam, Tamil Nadu (now called Ramayapatnam, Andhra Pradesh) in India. It was built by many of his pupils, who had never seen a two-story building or an architectural plan. The photograph below was evidently pressed at some time against a book or document that partially imprinted itself onto the photo. This building is still in use today and is visible in Google Earth at coordinates 15.03827N, 80.03919E. 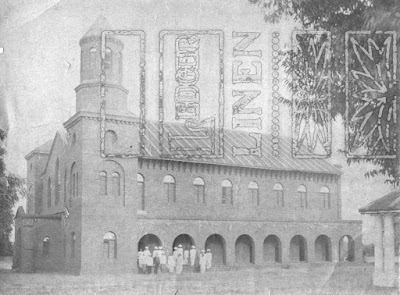 Robert's main contribution to science was his effort to synthesize thiamine (vitamin B1), which he did in 1936. Among his awards were the Willard Gibbs Award in 1938, the Elliott Cresson Medal in 1940, and the Perkin Medal in 1947. His brother, Roger J. Williams, also was a chemist who discovered Vitamin B5.

Robert was ten years old when he left India with his family and returned to the United States. He studied at Ottawa University in Kansas and procured a master's degree at the University of Chicago in 1908. He taught for a time at the Bureau of Science in Manila. In the Philippines, Robert met U.S. Army Capt. E. B. Vedder, who went on to isolate Vitamin C in 1932. Vedder was concerned about a wasting disease among the Philippine Scouts, a group of soldiers who did police work with American officers. The American soldiers did not develop Beriberi, but the number of deaths and discharges due to disability were high among the Filipino soldiers.  Among the civilian population in Manila, about 220,000 deaths occurred each year from Beriberi.

Capt. Vedder had been experimenting with chickens and showed Robert Williams a quart of brown liquid, an extract of rice polish. Vedder note that when 1 milliliter of the extract was given to the chickens daily they did not develop the paralysis known today as polyneuritis gallinarum, a condition that caused the birds to die in three to six weeks. Vedder suspected that the polyneuritis of chickens was a clue to understanding the cause of Beriberi in humans. Soldiers with Beriberi developed swelling in the feet and hands, atrophy of the muscles, beginning in the legs, and severe neurological problems. Death usually occurred by heart failure, often very suddenly.

Robert's early efforts to discover the cause of Beriberi failed. He was so troubled by the ravages of the disease that he witnessed that he began to pray about the problem.

Robert became aware of the research of Kanehiro Takaki, a Japanese medical officer whose perseverance in the face of considerable opposition, led the Japanese to issue rations to Japanese sailors that improved diet and greatly diminished the number of Beriberi cases. Takaki's 1906 lectures were published in Lancet (Volume 167, No. 4315, p1333, 12 May 1906)

Williams now was convinced that the disease was due to nutritional deficiency. He reviewed all the available research and began to think that the disease was most likely to appear in populations that consumed white rice as their main staple. He suspected that beriberi is due to a lack of some essential component in white rice.

Robert returned to the United States in 1911. He did additional graduate work at the University of Chicago. He married Augusta C. Parrish and returned with his bride to Manila in the summer of 1912.  He and Vedder continued feeding experiments with chickens for one year. During this time they attempted to treat a few cases of human Beriberi.

Vedder left the Philippines in the spring of 1913 Robert continued to search for a better way to isolate the curative component of rice polishings. He used a colony of domesticated chickens that he set up at the Bureau of Science and he sought opportunities to test his preparations on people with Beriberi, especially infants who would otherwise die within a short time. He made excursions into the Tondo section of Manila, but often arrived too late, and was informed that the child had died. In his book Towards the Conquest of Beriberi (Harvard, 1961) Williams reports, "Sometimes I found the house in time and was then uniformly successful, sometimes dramatically..." (p. 102)

In 1916 Williams began trials of synthetic substance in the hope that he could identify a substance with antineuritic potency and could then proceed by modifications of the structure to improve on it. He was now collaborating with Atherton Seidell who worked at the Hygienic Laboratory, later the National Institutes of Health in Washington D.C.

In 1930 Maurice I. Smith experimenting with rats showed that Beriberi resulted when rats were fed a diet that was deficient in one particular vitamin, the antineuritic vitamin B1, as it had come to be called.  He found that "the only reliable source" of vitamin B2 (essential for growth), nearly or completely free from vitamin B1, is an autoclaved yeast or yeast extract. Smith first suggested this in 1926. Both Smith and Williams also recognized that the autoclaving process destroys most of the vitamin B1 factor essential in the prevention of Beriberi. Another process was needed.

In 1934 Robert developed a way to isolate 1/3 ounce of thiamine from a ton of rice polishings. In 1936, he worked of the molecular structure of thiamine, and in 1936 he synthesized thiamine, making it possible for rice and other products to be fortified with vitamin B1, thus virtually eradicating Beriberi worldwide. In 1961, Williams wrote, "The great killing epidemics of beriberi are a thing of the past for all but the most ignorant know enough to prevent them when they start." (Toward the Conquest of Beriberi, p. 219)

Reflecting on the "long history of failures and occasional successes in the struggle to isolate the vitamin in profitable amounts," Williams wrote, "It was really necessary for biochemistry to gain new insights and powers, to learn new ways of dealing with minute quantities of perishable substances in nature... Synthesis has produced a thousand tons of the once rare substance and much of it has been used to bring better health to millions in all parts of the world." (Toward the Conquest of Beriberi, p. 284)

After returning to the United States, Robert Williams worked for Bell Telephone Laboratories from 1915 to 1945. He resided in Summit, New Jersey, where he died at the age of 79 on October 2, 1965. On his grave stone it reads "He labored much in the Lord." 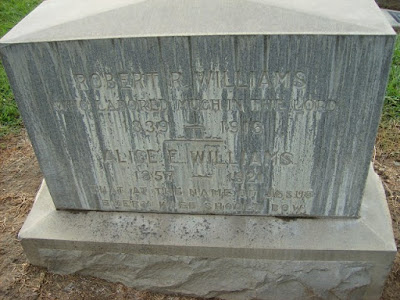