Sister Celine is one of the most brilliant mathematicians of the 20th century and also one of the least known. She is most noted for her ground breaking work on hypergeometric functions and linear algebra. 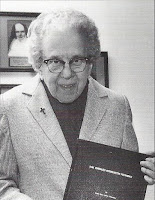 Mary Celine Fasenmyer, Ph.D., RSM, was born in Crown, Pennsylvania on Oct. 4, 1906 to George and Cecilia Leight Fasenmyer. They were members of St. Mary Catholic Church in Crown, Pennsylvania. Her father owned an oil lease in Crown and he ran his own business from there. Mary's mother died when she was only one year old. Three years later George remarried Josephine.

Mary attended St Joseph's Academy in Titusville, a town about 30 miles from Crown. At St Joseph's Academy she exhibited talents in mathematics but there was no opportunity for her to go to the university and her step-mother Josephine was very sick, so she entered the St. Joseph Novitiate in Titusville on April 13, 1924 before graduating from high school. She began to teach and did so for the next ten years. She was sent to teach in Pittsburgh and during this time she studied mathematics and physics at the University of Pittsburgh.

The research she did during her doctoral studies became an item of interest among mathematicians in the early 1990s when advances in computer technology made her research practical.

Sister Celine was told by her community of nuns to go to the University of Michigan for her doctorate, which she did in 1942, earning her degree in 1946. Her thesis - "Some Generalized Hypergeometric Polynomials" - was written under the direction of Dr. Earl D. Rainville, who Sister Celine regarded as an extremely good teacher and mentor. Dr. Rainville dedicated a chapter in his textbook entitled, "Sister Celine's Technique" based on the research she had conducted. It is the intellectual progenitor of the computerized methods that we use today to prove hypergeometric identities, thanks to the recognition by Doron Zeilberger that her method can be adapted to prove such identities. The hypergeometric polynomials she studied are called Sister Celine's polynomials.

Sister Celine's doctoral thesis showed how one can deduce recurrence relations that are satisfied by sums of hypergeometric terms, in a purely mechanical ("algorithmic") way. She used the method in her thesis to find pure recurrence relations that are satisfied by various hypergeometric polynomial sequences. In a 1947 paper in the Bulletin of the American Mathematical Society, she developed the method further, and in her paper On Recurrence Relations in the American Mathematical Monthly, she explained its workings to a broad audience [Volume 56 (1949), p.14, Abstract].

These papers were further elaborated by mathematicians Doron Zeilberger and Herbert Wilf into "WZ theory", which allowed computerized proof of many combinatorial identities. Before Sister Celine's work there was no pattern or algorithm to prove difficult identities. The power of her method was recognized by Zeilberger and Wilf who read her work and set about to test it using computers. Their 1996 book A=B devotes two chapters to Sister Celine's polynomials.

"Before her method came to light, mathematicians needed to spend months, sometimes years, to `prove' something," Zeilberger said. "Now, with computers, it takes a few seconds."

This modest genius once told a reporter from the Pittsburgh Post-Gazette, "I don't think I'm proficient in math."

Sister Celine also did post-graduate study at Montclair State College, Michigan College of Mining and Engineering, and American University. In 1945 she became a professor of mathematics at Mercyhurst College and taught there until her retirement in 1979. From 1954 to 1960 she also served on the Mercyhurst College Board of Trustees.

Herbert Wilf, Professor of Mathematics at the University of Pennsylvania, contacted Sister Celine in 1993. He went to the Mercy Mother House in Erie where she lived and invited her to attend a discrete mathematics conference in Boca Raton, Florida. The conference was attended by about 500 people from 15 countries. The diocese awarded her a travel grant and she was able to attend the conference. When Wilf introduced her from the audience, the 87-year-old nun rose to her feet and said she wished to make only two remarks. First, she wanted to thank Professor Wilf for the invitation. And second, she said, casting a level gaze at the distinguished mathematicians, "I want you all to know - I really did that work." It is reported that there wasn't a dry eye in the house. 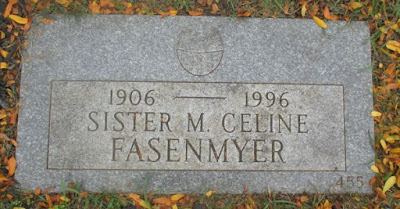 She died on December 27, 1996 and was buried at Gate of Heaven Cemetery in Erie, Pennsylvania. Her grave is marked by the simple stone shown above. She served 73 years as a Sister of Mercy and taught for 34 years at Mercyhurst College.

"My whole aim in getting my doctor's degree was for the college," Sister Celine once explained to Dr. Wilf. "I didn't want to do more research, except what would help me to be a better teacher."

Related: Herb Wilf Interview with Sister Celine (1993); The Greatest Mathematician No One Ever Knew; Another Famous Nun-Mathematician