Standing stones or monoliths have been found in many parts of the world. They are associated with archaic high places near water systems. Another word for these rock shelters is kar. The sites of Karnak on the Nile and Carnak in Brittany are examples of shrine centers with standing stones.

In Dravidian car means "sheltered together" and kari refers to a river. In Manding (a language of Africa) kara means "to assemble."
Since the kar were places of burnt offerings the term is also associated with charcoal and soot. The Turkish kara means "black." Among the Magyar of Hungaria, korom refers to soot, as does the Korean word kurim. Among the Nilotic Luo, kar specifies a place with boundaries. In Albanian, karpë means "rock."

The kars of the archaic world were mainly circular. Kikar refers to a circle, as in Exodus 25:11 - kikar zahav tahor, meaning "circle of pure gold."

Many rock shelters (kar) have been found in the Carpathian mountain range. The range is called Karpaty in Czech, Polish, and Slovak, and Карпати in Ukrainian, Carpati in Romanian, Karpaten in German, Kárpátok in Hungarian, Karpati in Serbian, and Карпати in Bulgarian. 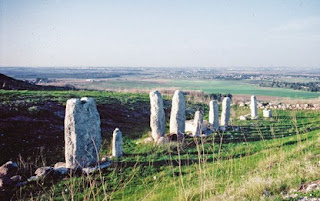 Circles of standing stones can be found in the Sinai, the Negev and in the Judean hills. In Hebrew they are called masseboth (singular, massebah) which is usually translated as “pillars” or “standing stones.” They are arranged to create a place for religious ceremony and ritual.

There are about 40 Paleolithic sites in the Judean hills, many of them near Bethlehem. Human habitation in the area of Bethlehem between 100,000-10,000 BC is well-attested along the north side of Wadi Khareitun where there are three caves: Iraq al-Ahmar, Umm Qal’a, and Umm Qatafa. These caves were homes in a wooded landscape overlooking a river. At Umm Qatafa archaeologists have found the earliest evidence of the domestic use of fire in Palestine. 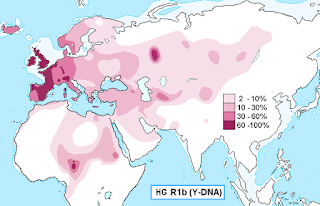 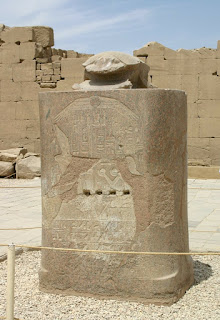 The oldest known stone circles date to 175,000 years ago and were formed inside the Bruniquel cave in southwestern France. These appear to have been ceremonial sites where Neanderthal humans controlled fire and consumed animals.

Standing stones also have been found in Spain, Portugal, Italy, Serbia and Armenia.

Some of the stone circles and megaliths found in Senegal and Gambia date to the 3rd century BC. The late Dr Catherine Acholonu called attention to megaliths in the Cross River region of Nigeria and Cameroon. She estimated a total up to 32 such sites, but not all of these were circles of standing stones. Sometimes a single standing stone marked a sacred shrine. Apparently, at least one circle has been found at Emangabe.

In Sardinia, 200 menhirs in the locality Biru‘e Concas have been dated between the late Neolithic (3200-2800 BC) and the Eneolithic (2800-1800 BC). These are located at the geographic center of Sardinia. It is likely that there are more monolithic sites in the Mediterranean, but these are probably submerged and yet to be discovered.

The distance from Africa to the first island of the archipelago was only about 30 miles. Given what is known today about seafaring archaic populations, it is almost certain that the earliest inhabitants of the islands were from Africa.

Related reading: The High Places; Religion of the Archaic Rulers; Stone Work of the Ancient World; Some Marks of Prehistoric Religion; The Peoples of Canaan; The Origin of Circumcision; Henges and Rondel Enclosures