Some people claim that the idea that humans originated in Africa came from Charles Darwin. That is not true. Long before Darwin, the writers of Genesis recounted how the first humans lived in a well-watered region that was bounded on the south by 2 rivers in Ethiopia and bounded on the north by 2 rivers in Mesopotamia (Genesis 2:10-14). The Bible calls this vast expanse "Eden" and Abraham's ancestors are said to originate in the Upper Nile Valley. This is also the region where the oldest human fossils have been found.

The year before, in May 1978, Mary Leakey spoke at a Nobel Symposium in Sweden. She attended with a co-worker, Donald C. Johanson. Rising to speak first, Johanson announced that his Afar Triangle finds were ape ("Australopithecus") and he included Mary Leakey's 4 million year old Laetoli specimen (jaw bone LH4) from Tanzania as an exhibit. Leakey was not pleased.  She expressed her regret that “the Laetoli fellow is now doomed to be called Australopithecus afarensis.”

About 40 million years ago a land ridge rose in the horn of Africa. The Arabian Peninsula broke away from Africa and the Great African rift opened. A great lowland formed called the Afar Depression or the Afar Triangle. This map shows some volcanoes (red triangles) in the geologically unstable region of East Africa. The Afar Triangle is where plates are pulling away from one another. The Arabian Plate is separating in a counterclockwise direction from Africa. The African Plate is splitting into the Nubian Plate and the Somali Plate. 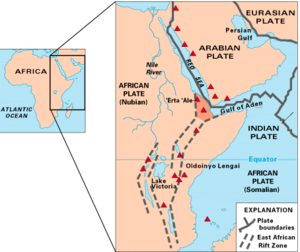 This area also corresponds to ancient Eden, shown here in red. Eden is described in Genesis as a well-watered region.

Annual rains from the surrounding highlands flow into the Afar Depression. This exposes fossils which have been collected and studied by teams of paleoanthropologists. All of the African Great Lakes were formed as the result of rifting and most lie within the rift valley.


Tim White (UCLA Berkeley) has done research here since the early 1980s. He has benefited from the seasonal rains in the Afar region. He said, "We let the natural erosion of the deposits work for us. Then we work the terrain, picking up pieces and placing them in geologic context to bring back the lost world."

Many of the discoveries of archaic human fossils are found simply by walking the area. Over thousands of years, seasonal rains have exposed the artifacts and bones of our earliest human ancestors.