The Faraday Institute for Science and Religion is an interdisciplinary research enterprise based at St Edmund's College, in Cambridge, England. In addition to academic research, the Institute engages in public education about science and religion by means of Courses, Conferences, and Lectures.

The Faraday Institute is named after Michael Faraday (1791-1867), a brilliant 19th-century British scientist and natural philosopher. He discovered many of the fundamental laws of physics and chemistry. The unit of electrical capacitance is named the farad (with the symbol F) in Faraday's honor. Faraday was one of the inventors of the electric motor. 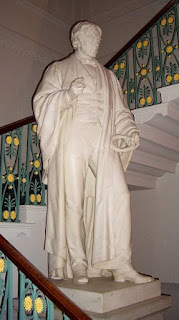 Marble statue of Faraday in the Royal Institution

Faraday was a man of deep Christian faith with an outstanding scientific career. He was an effective communicator and an example of how to do inter-disciplinary research.  He was a highly respected as a speaker at the Royal Institution.

Faraday was born in 1791 in Newington Butts, Surrey, the son of an English blacksmith who suffered from poor health. The family struggled financially. The young Faraday would have learned some basic physics and chemistry by observing the metal work done in his father's shop. While Michael was still a young boy his family moved to rooms over a coach house in Jacobs Mews, near Manchester square on the western edge of London. The Faradays lived there until 1809.

Michael began to run errands for a local bookseller, George Riebau, to earn money for the family. At age 14 he became an apprentice to Riebau and this provided him an opportunity to read every book on science in Blandford Street bookshop. Two books especially captivated him: The Encyclopedia Britannica, and Conversations on Chemistry, written by Jane Marcet. Faraday became so enthralled by science that he began to spend a portion of his earnings on chemicals and apparatus. He conducted experiments to confirm or disprove what he was reading.

Faraday attended lectures at the Royal Institution given by John Tatum and Sir Humphry Davy. Davy was a scientist who discovered several chemical elements. In 1812, Faraday applied for a position with Davy. He showed Davy the volumes of notes he had taken during the lectures and while reading about science. In 1813 Davy hired Faraday to assist with his research and demonstrations.

Faraday's associated with Davy opened the way for him to become acquainted with many of the leading men of science in his time. Faraday became director of the Royal Institution laboratory in 1825, and Fullerian Professor of Chemistry there from 1833 to 1867. He and his wife Sarah lived in an apartment (flat) owned by the Institution until the couple were given a house near Hampton Court in 1858.

In 1849 Faraday gave a private lecture before Prince Albert in which he explained that magnetism appears to influence every particle in the universe. Concerning magnetism, he said, "What its great purpose is, seems to be looming in the distance before us....and I cannot doubt that a glorious discovery in natural knowledge, and of the wisdom and power of God in the creation, is awaiting our age." 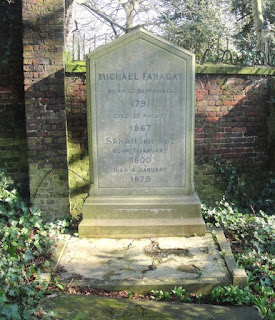 Faraday's religious upbringing in the Sandemanian Church shaped his attitudes towards science and the Bible. He believed in God as creator, but he did not look to the Bible as a source of scientific information because he had been taught to read the Bible in a literal way. This seemed to put the Bible and science in conflict. Nevertheless, Faraday maintained the conviction that the Creation and the Bible have the same author, so that "the natural works of God can never by any possibility come into contradiction with the higher things that belong to our future existence..."

Faraday's view that the Bible speaks about spiritual things whereas science explores material things was typical of many 19th century Christians in the sciences. The science that interested him, namely, magnetism, electricity, and chemistry, are not explicitly present in the Bible. The proper way to pursue science was a matter of great concern to him. He was very much a British empiricist. He once said, “I will simply express my strong belief, that that point of self-education which consists in teaching the mind to resist its desires and inclinations, until they are proved to be right, is the most important of all, not only in things of natural philosophy, but in every department of daily life.”