Silk proteins were found in these 8500-year-old tombs at Jiahu in the Henan Province in central China. 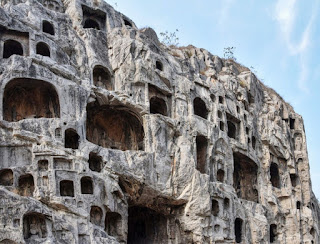 The oldest evidence of silk made by silkworms has been found buried in 8,500-year-old tombs in China, revealing that people may have used the luxurious material thousands of years earlier than previously thought, a new study finds.

Silk was a rare luxury good in the ancient world. Its fame helped give a name to the Silk Road, the legendary network of trade routes that once connected the East and West from China to Rome.


In the Biblical world, silk fiber was a rare commodity and worn only by the most wealthy persons. It was used to weave cloth for the ancient rulers of China, Japan and other parts of Asia.

Very little silk has been found in the areas ruled by Abraham's ruler-priest ancestors because their clothing was patterned after the ruler-priests of the Nile and was made of linen. (See image on the right.)

Linen fabric is made from the cellulose fibers that grow inside of the stalks of the flax plant (Linum usitatissimum). This plant is an annual and one of the oldest cultivated plants in human history.

Silk was brought to the Middle East from China by caravan traders who carried their cargo on camels. The caravan routes from the Nile to China and from Syria to Turkey and Rome.

The caravan routes are referred to as the Silk Road, a network of interlinking routes that stretched 4,000 miles. In addition to silk, goods such as ivory, amber, gold, coral and the hides of exotic animals moved along the Silk Road.

Silk was called serikon (Greek) and sericum (Latin), and it is mentioned in the book of Revelation as one of the commodities found in Babylon (Revelation 18:12). Small amounts of silk were traded to the eastern Mediterranean as early as the second half of the second millennium B.C.

Evidence of silk has been found at ancient sites such as Palmyra in the Syrian Desert and in Egyptian tombs. Silk fibers were found in the hair of an Egyptian female mummy found in Thebes. The mummy has been dated to the twenty-first dynasty (1069-945 B.C.).


Terracotta representations of Bactrian caravan camels show cloth bolts and yarn or floss loaded on the camels. Bactria was formerly called Zariaspa, according to Strabo and Pliny. 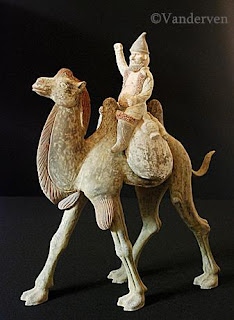 The Tarum Mummies found in China date from 1900 B.C. The so-called "Ur-David" mummy (shown below) was tall and had red hair. This mummy, also called Cherchen Man or Chärchän Man, dates to about 1000 B.C. 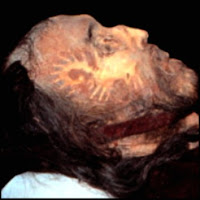