The Great Solar Eclipse of 2017


On Aug. 21, the moon will completely block the sun for sky watchers from Oregon to South Carolina, in the first total solar eclipse visible from the United States mainland since 1979. 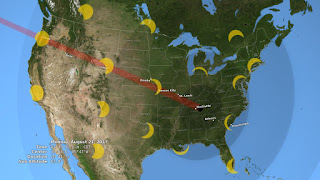 Above is a visualization of the United States during the total solar eclipse of Aug. 21, 2017, showing the umbra (black oval), penumbra (concentric shaded ovals) and path of totality (red). This version includes images of the sun, showing the star's appearance in a number of locations, each oriented to the local horizon.

A total solar eclipse provides scientists the opportunity to look at the sun's corona, or outer atmosphere, which will appear as rays of white light surrounding the moon. They will gather data about the sun's corona, solar flares, coronal mass ejections, and the solar wind.