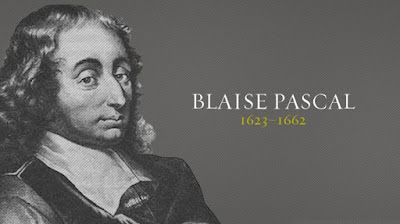 The French mathematicians Blaise Pascal (1623-1662) and Pierre de Fermat (1601-1665) are credited with the development of probability theory.

At the age of sixteen, Pascal wrote on the subject of projective geometry, now known as Pascal's Theorem. The theorem states that, if a hexagon is inscribed in a circle, then the three intersection points of opposite sides lie on a single line, called the Pascal line.

He is also known for Pascal’s Triangle, a convenient tabular presentation of binomial co-efficients, where each number is the sum of the two numbers directly above it.

Pascal's parents were Étienne Pascal (1588 – 1651), a magistrate who collected taxes, and Antoinette Bégon Pascal (1596-1626), the daughter of a merchant. As a young man, Pascal built a calculating machine that performed additions and subtractions, to help his father with his tax calculations.

Pascal was an inventor, a writer, a mathematician and a philosopher. In 1631, His father sold his government post as a tax collector and moved his family to Paris. There he conducted scientific experiments and pursued mathematics. He also taught his children. Pascal’s exceptional intellectual gifts, Étienne designed a curriculum to meet his son's exceptional intellectual gifts.

Pascal showed great ability in math and his father gave him a copy of Euclid's Elements. Reading the book, Pascal realized that he already had discovered several of Euclid's proposition for himself. He had proved on his own that the sum of the angles of a triangle is equal to two right angles. Pascal quickly mastered Euclidean geometry.

At the age of fourteen Pascal was admitted to Marin Mersenne's weekly scientific discussions. The French Academy of Sciences developed out of Mersenne's discussions.

As a man of the Enlightenment, Pascal recognized the value of reason. He also understood that not everything is understood or apprehended by reason. When it comes to the spiritual life, human reason is often inadequate. Pascal wrote, "Reason's last step is the recognition that there are an infinite number of things which are beyond it."

Pascal's most famous book is Pensées. A central argument of the book is that Christianity is reasonable, though not provable by reason. About Christianity, he wrote, "Other religions, as the pagan, are more popular, for they consist in externals. But they are not for educated people. A purely intellectual religion would be more suited to the learned, but it would be of no use to the common people. The Christian religion alone is adapted to all, being composed of externals and internals. It raises the common people to the internal, and humbles the proud to the external; it is not perfect without the two, for the people must understand the spirit of the letter, and the learned must submit their spirit to the letter." (Pensées, 251)


Such mystical experiences are not uncommon among intelligent people. Other Christians who had similar experiences include John of the Cross, Teresa of Avila, Julian of Norwich, Hildegard of Bingen, Bernard of Clairvaux, John van Ruysbroeck, Francis of Assisi, and Thomas Aquinas... all exceptional figures of history. This fact did not stop some European intellectuals from attacking Pascal for his morbid religion. Pascal was viewed as a cheerless, brooding ascetic. Voltaire was especially critical of Pascal's pessimistic philosophy of man's depravity. Pascal believed that without God, humanity is destined to misery.

Here Pascal echoes the reasoning of the Apostle Paul, who wrote:

"...for we have testified about God that he raised Christ from the dead. But he did not raise him if in fact the dead are not raised. For if the dead are not raised, then Christ has not been raised either. And if Christ has not been raised, your faith is futile; you are still in your sins. Then those also who have fallen asleep in Christ are lost. If only for this life we have hope in Christ, we are of all people most to be pitied." (1 Corinthians 15:15-19)

Pascal died at the age of 39, having suffered from various illnesses most of his life.