How Planets Are Formed 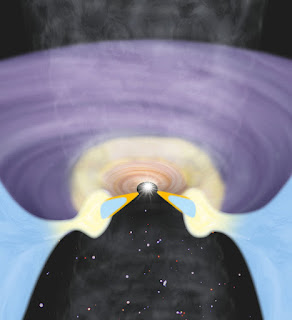 Astrophysicists have been studying a newborn star system called L1527 which is about 450 light-years away from Earth, in the constellation Taurus. This is one of the closest newborn star systems. It has only 0.18 times the mass of the sun but the surrounding envelope of gas stretches to more than 1,000 astronomical units (AU).

An AU is the average sun-Earth distance: about 93 million miles (150 million kilometers).

The proto-planetary disk extends about 90 AU from the star and is surrounded by an envelope of gas. The disk is pulling in space dust and particles. Scientists think this is a model for how planets are made.

The researchers used the Atacama Large Millimeter/submillimeter Array (ALMA) radio telescope in Chile to pick up radio waves emitted from specific gases making up the envelope and part of the disk. These measurements revealed that the material experienced a shock wave before reaching the slowed-down planetary disk.

Researchers think the collapsing gas cloud forming the new star system L1527 might look like the image above. Note the flattened envelope of gas transitioning to an inner protoplanetary disk. Data from ALMA suggests that the material experiences a slow-down at the spot where its angular momentum overpowers the star's pull inward.