Medical specialists have evaluated an 17th century medical document written on papyrus. It is called the Edwin Smith Papyrus and it was written in Egyptian hieratic script, that is the script used by royal scribes and priests of Egypt and Nubia. Both hieratic and hieroglyphic scripts were used for keeping records, managing accounts and writing letters. The hieratic script was also used by the healers of the ancient world who were also practitioners of religion.

The text consists of 48 cases dealing with wounds and trauma injuries. Each case has a description of the injury; diagnosis; prognosis; treatment; and further explanations of the case, which resemble footnotes. 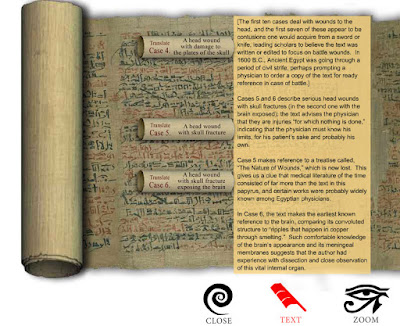 The Smith Papyrus reflects a even older tradition of medical diagnosis and treatment among the ancient Nilotes. An important new translation of this ancient document has been done by James P. Allen, formerly of the Metropolitan Museum of Art, in collaboration with the New York Academy of Medicine. All used high-resolution scans lent by the scroll's owner.

Donald A.B. Lindberg, MD, the Director of the New York Academy of Medicine has said, "The Smith Papyrus is extremely important because it showed for the first time that Egyptians had a scientific understanding of traumatic injuries based on observable anatomy rather than relying on magic or potions."

When the American collector Edwin Smith acquired the papyrus in Egypt in 1862, it consisted of a single scroll about 15 feet long with some loose fragments, but it was cut into 17 columns sometime in the 19th century. The leaves had to be digitally "stitched" together to recreate the original appearance of the scroll.

"The technical challenges of digitally transforming and making this scroll available on a personal computer were enormous," said George Thoma, PhD, chief of the Communications Engineering Branch at NLM's Lister Hill Center. Thoma led the Library's technical efforts and team. "The memory requirements were immense, so we had to come up with ways to manage the memory for home use. We created the illusion of rolling and unrolling by superimposing the frame by frame animation of the rolled section of the scroll on the large image of the entire papyrus."

Read more here: An Ancient Medical Treasure at Your Fingertips; University of Chicago Oriental Institute PDF of the Smith Papyrus

Email ThisBlogThis!Share to TwitterShare to FacebookShare to Pinterest
Labels: medicine