In the the 19th and 20th centuries some women of the southwestern Hunan Province in China wrote using a script that no man could read or write. The writing system allowed these women to keep autobiographies and swap stories and poems between “sworn sisters" but the script is vanishing. 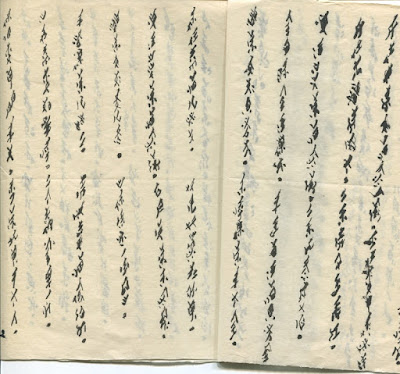 
Cathy Silber, a professor at Skidmore College in New York, worked to decipher and study the written language. She worked with 80-year old Yi Nianhua, one of the last remaining writers of Nüshu. Yi died in 1991 at the age of 85.

The practice of Nüshu was passed down from mother to daughter. Not many Nüshu documents can be found because the script was used mainly in southwestern China and some women had their writing buried with them, leaving few surviving original scripts.

Nüshu’s elongated lines are in contrast to the wider blocks of Chinese characters. “It’s more efficient than Chinese because it’s phonetic,” says Silber. “A single symbol would represent every syllable with the same sound. So you get more bang for your buck with each character.”

The last woman known to possess knowledge of Nüshu was Yang Huanyi, who died in 2004. Linguists believe that the writing system began in Jiangyong County, where Yang was born. She learned to read and write the language as a little girl. Before her marriage, she exchanged letters in Nüshu with the eldest of the seven "sworn sisters"of Jiangyong County. Yang spent three years with the seven sisters to learn the language, and after all seven sisters died, she was the world's last expert on the language.