Virtual View of the Solar Eclipse


One week from today, on Monday, August 21st, people in the United States will be able to view the great solar eclipse of 2017!

A total solar eclipse provides scientists the opportunity to look at the sun's corona, or outer atmosphere, which will appear as rays of white light surrounding the moon. They will gather data about the sun's corona, solar flares, coronal mass ejections, and the solar wind.

A solar eclipse occurs when the Moon passes between the Earth and the Sun, blocking all or a portion of the Sun. A solar eclipse can be total or partial. Students can view a total eclipse of the Sun on Monday, August 21 if you go to the part of North Carolina shown on this map: 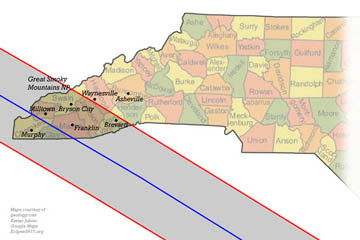 .You must be in the path shown between 2:00 and 2:30 pm in order to see the total eclipse of the Sun! This is a narrow path of only 43.6 miles in North Carolina. Hopefully, the weather will be clear.

Residents of Columbia, South Carolina will be able to view a total solar eclipse about 3:10 pm.

Please wear protective eye gear while viewing the eclipse. Wearing eye protection permits your pupils to dilate. Do not remove the eye protection until you are under cover and do not look directly at the sun after removing the glasses.


Related reading: Eclipses: Do you know the difference?; The Great Solar Eclipse of 2017; Science You Can Do During the 2017 Solar Eclipse; Studying Solar Winds During Eclipses