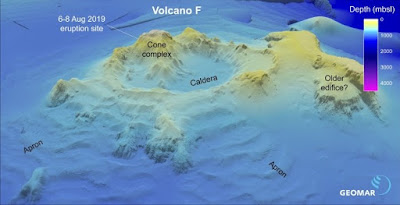 A large accumulation of pumice has been drifting in the Southwest Pacific towards Australia. The point of origin of this pumice raft is a submarine volcano in Tongan waters. The highly porous pumice is of such low density that it floats.

Since August, this raft of pumice has been moving closer to Australia. Researchers were eager to identify the source and an image of the ESA satellite Copernicus Sentinel-2 taken on 6 August 2019, showed clear traces of an active underwater eruption. The volcano has been named Volcano F.

The debris from the eruption is expected to reach the Great Barrier Reef in late January and early February.