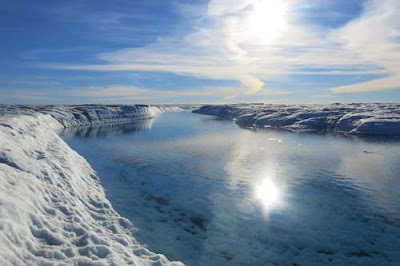 In the past, microorganisms called "cyanobacteria" were grouped by looking at their shape under a microscope. Now researchers also use DNA to classify them.

Researchers collected 26 samples of water, soil, and bone for analysis, from varied cold-weather locations around the globe (Antarctica, the Arctic, Greenland, Sweden, and Germany), each suspected to contain different types of cyanobacteria in the genus Phormidesmis. Phormidesmis priestleyi is a cyanobacterium found throughout the cold regions.

They grew Phormidesmis from each sample in the laboratory, and then analyzed each using a heavy-duty microscope to characterize their shapes and compare them to known cyanobacterial cells.

DNA is a very long molecule made of four “bases” and the order of those bases is unique for each living thing. The cyanobacteria’s DNA was then extracted and isolated from each sample and the base order for each DNA strand was determined. This is referred to as genome sequencing. The authors sequenced a gene known as the “16S rRNA gene” that is commonly used for classification of bacteria. Those gene sequences were compared to other gene sequences in large public databases of already-identified sequences to see if there was a match.

Based on these DNA results, the researchers were able to provide better classification of cyanobacteria. They also unexpectedly discovered two new species of cyanobacteria based on visual observations and DNA testing. These new organisms were named Phormidesmis arctica and Phormidesmis communis, and the scientists reclassified one species that was previously in the genus Leptolyngbya to Phormidesmis. This species is now Phormidesmis nigrescens.

A new genus was also suggested, Leptodesmis, as the genome is not easily recognizable by its shape and appears to belong to more than one taxonomic group. The importance of properly classifying all life forms gives scientists a better understanding of the interrelationships of these organisms and is the necessary basis for other studies. Humankind must understand the smallest living organisms in order to fully understand all living things.