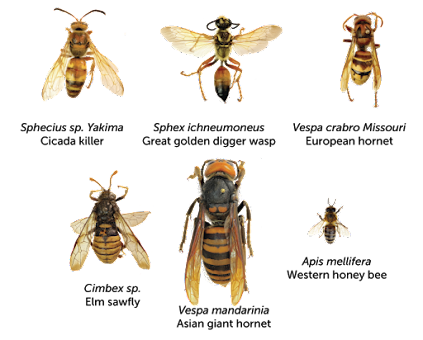 The Pacific Northwest of the United States has seen an increase in the number of “murder hornets” or Asian giant hornets (Vespa mandarinia). This hornet is a threat to honeybees and is potentially dangerous to humans.

A party of several dozen Asian giant hornets can kill a whole bee hive and can kill thousands of bees in just a few hours.
This species feed their young the bodies of bees. They can sting over and over, in contrast to honeybees that die after its single-use stinger rips out of its body.
Another difference: Honeybees collect plant pollen as protein whereas the giant hornets slaughter the adult bees, then carry back the brood as food for their larvae.
Watch for the Latin terms vespa (hornet) and apis (bee). These terms distinguish between hornets and bees.
Related reading: What You Need to Know About Murder Hornets; Ancient Mythology About Bees; Oldest Bee Hives Discovered in Israel
Posted by Alice C. Linsley at 7:42 AM

Email ThisBlogThis!Share to TwitterShare to FacebookShare to Pinterest
Labels: bees