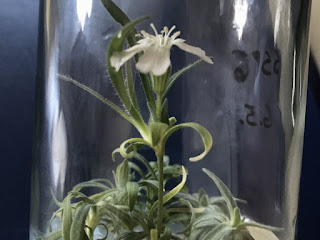 The oldest plant ever to be “resurrected” has been grown from 32,000-year-old seeds, beating the previous record holder of the Judean Palm by 30,000 years.

The narrow leafed perennial campion called Silene stenophylla is a small plant whose modern relatives are found in eastern Russia and northern Japan. This species that grows on stony cliffs or sandy shores. Once a year, it produces five-petalled flowers that range in color from white to pink to lilac.

A team of scientists from Russia, Hungary, and the United States recovered frozen Silene stenophylla seeds in 2007 while investigating about 70 ancient ground squirrel burrows or caches, hidden in permanently frozen deposits in northeastern Siberia.

The age of the seeds was estimated at between 20,000 and 40,000 years, dating the seeds to the Pleistocene epoch. More than 600,000 fruits and seeds thus preserved were located at the site.

Normally, the rodents would have eaten the food in their larders, but in this case a flood or some other weather event buried the area. The larders were at the level of the permafrost which resulted in the material freezing almost immediately. More than 600,000 fruits and seeds thus preserved were located at the site.

Years later, a team of scientists at the Russian Academy of Sciences successfully revived one of the plants: a flowering plant from a 32,000-year-old fruit!

Email ThisBlogThis!Share to TwitterShare to FacebookShare to Pinterest
Labels: biology