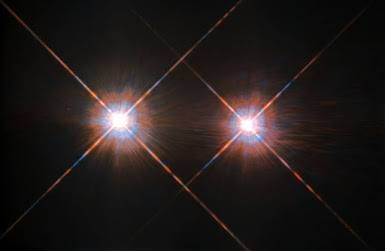 Astronomers have glimpsed what seems to be an unknown planet. In Nature Communications, the research team describes how infrared observations for 100 hours in May and June 2019 revealed a bright dot they have been unable to explain. If confirmed as a planet, the sighting would be the first to directly image an exoplanet around a nearby star.

Scientists spotted the bright dot near Alpha Centauri A, the closest star system to the Earth. It appears to be one of a pair of stars that swing around each other so tightly they appear to be a single star in the southern constellation of Centaurus. The binary star system is 4.37 light years away, a relatively short distance given the expanse of the cosmos.
The researchers are referring to it as a “planet candidate” until further observations can verify the sighting.
The astronomers used the Very Large Telescope, or VLT, operated by the European Southern Observatory located in Chile’s Atacama Desert. A new coronagraph on the instrument blocks light from Alpha Centauri, making it easier to spot orbiting worlds.
Pete Klupar, the chief engineer of the Breakthrough Initiatives, said,“We’re trying to see a flashlight right next to a lighthouse.”
Read more here.
Posted by Alice C. Linsley at 8:04 AM