News sources are picking up on the fact that the solar maximum is approaching in July 2025, with an increase in the number of sunspots. Sunspots often appear in pairs with different magnetic polarities. They become more prevalent every 11 years (solar cycle) and they migrate through latitudes, moving closer to the equator as the solar cycle progresses.

SpaceWeatherLive tracks solar activity and reports that the Sun has erupted from February 1st through the 17th with some days featuring multiple flares. That includes three flares of the second-most powerful category: an M1.4 on February 12; an M1 on February 14; and an M1.3 on February 15.

There were also five M-class flares in January. The mild geomagnetic storm that knocked 40 newly launched Starlink satellites from low-Earth orbit followed an M-class flare that took place on January 29.
Solar flares happen because of the constantly moving magnetic fields in the Sun's atmosphere. The frequency of solar flares coincides with the Sun's 11-year cycle. When the solar cycle is at a minimum, fewer solar flares are detected. Flares increase in number as the Sun approaches the maximum part of its cycle. 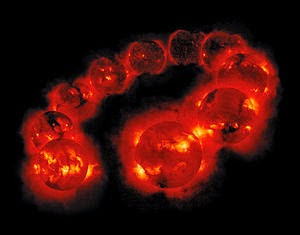 A solar cycle: a montage of ten years' worth of Yohkoh SXT images, showing the variation in solar activity during a sunspot cycle, after 30 August 1991 to 6 September 2001. Credit: Yohkoh mission of ISAS (Japan) and NASA.

This flip is one feature of the solar cycle. As the cycle progresses, the Sun's stormy behavior builds to a maximum, and that is when the magnetic field reverses. Then the Sun settles back down to a minimum, only to start another cycle.

Solar storms are not unusual. An ancient solar storm happened around7200 BC when most humans lived at Earth's middle latitudes, not near the poles. Another big storm came between 775-774 BC. By then humans were more widely dispersed and yet they survived that event.
However, in those times people did not rely on the technologies that we have today. On March 13,1989 the entire province of Quebec, Canada suffered an electrical power blackout caused by a solar storm. Some are concerned that a future large solar storm could return Earth to the dark ages.