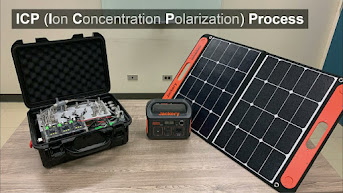 MIT researchers have developed a suitcase-sized portable desalination unit that can remove particles and salts to render drinking water that exceeds World Health Organization quality standards. The device runs with the push of one button and requires less power to operate than a cell phone charger. It also can be charged by solar power.
Unlike other portable desalination units that require water to pass through filters, this device utilizes electrical power to remove particles from drinking water. Eliminating the need for replacement filters greatly reduces the long-term maintenance requirements.
The unit relies on ion concentration polarization (ICP). Rather than filtering water, the ICP process applies an electrical field to membranes placed above and below a channel of water. The membranes repel positively or negatively charged particles — including salt molecules, bacteria, and viruses — as they flow past. The charged particles are funneled into a second stream of water that is eventually discharged.
The researchers also created a smartphone app that can control the unit wirelessly and report real-time data on power consumption and water salinity.

This unit could be deployed in remote and severely resource-limited areas, such as communities on small islands or aboard seafaring cargo ships. It also could be used to aid refugees or by soldiers carrying out long-term military operations.
Read more here and here.
Posted by Alice C. Linsley at 6:01 AM