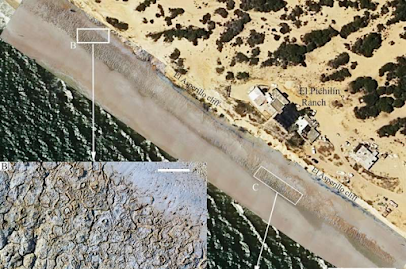 Current intertidal zone surrounding El Pichilín, Castilla beach, Matalascañas.
Footprints indicate the presence of humans in Southern Spain in the Chibanian (Middle Pleistocene) 200,000 years earlier than previously thought. More than 300 footprints have been found, of which 10% are considered well-preserved.
The discovery in June 2020 of human footprints more than 106,000 years old next to El Asperillo cliff (Matalascañas, Huelva) was considered one of the most important discoveries of that year. But now it has confirmed that those footprints are in fact 200,000 years older than previously thought, with a margin of error of 17,800 years, according to the data collected from the four samples of sedimentary levels in the cliffs of El Asperillo.
Researcher and GRS Radioisotopes technician Jorge Rivera applied an optically-stimulated luminescence technique at the Center for Research, Technology and Innovation laboratories at the University of Seville (CITIUS) and at CENIEH to the Matalascañas footprints to determine that the footprints are in fact 200,000 years older than previously suspected.

The Matalascañas discovery establishes the scenario that prevailed on the coast of the Gulf of Cádiz, with human settlements in a more temperate and humid climate than in the rest of Europe. In that period the sea level would have been about 60 meters below its current level. This implies that there would have been a great coastal plain, with large flood-prone areas, in which the footprints discovered in mid-2020 would have been made.

The site’s new dating also affects the vertebrate animals found, since the hominin traces there also included footprints of large mammals such as straight-tusked elephants, gigantic bulls (aurochs) and boars. It was the fauna that inhabited what is today Doñana National Park 300,000 years ago and not 100,000 years ago, as earlier reported.
The Chibanian includes the transition in palaeoanthropology from the Lower to the Middle Palaeolithic, which includes the emergence of modern humans between 300,000 and 400,000 years ago. As of 2016, the oldest known human DNA dates to the Middle Pleistocene, around 430,000 years ago.
Related reading: Footprints Indicate Human Presence in Spain in the Middle Pleistocene
Posted by Alice C. Linsley at 2:36 PM No comments:

Effects of the Tonga-Hunga Eruption 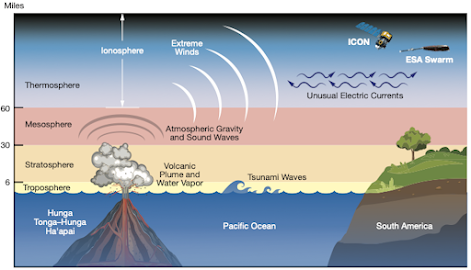 (Image not to scale.) The Hunga Tonga-Hunga Ha’apai eruption on Jan. 15, 2022, caused many effects. Some of those effects, like extreme winds and unusual electric currents were picked up by NASA’s ICON mission and ESA’s (the European Space Agency) Swarm. Credits: NASA’s Goddard Space Flight Center/Mary Pat Hrybyk-Keith
On 20 December 2021, an eruption began on Hunga Tonga–Hunga Haʻapai, a submarine volcano in the Tongan archipelago in the southern Pacific Ocean. The eruption reached a powerful climax on 15 January when it sent a tsunami racing around the world and set off a sonic boom that circled the globe twice.
The underwater eruption blasted an enormous plume of water vapor into Earth’s stratosphere. The plume sent enough water into the upper layers of the atmosphere to fill 58,000 Olympic-size swimming pools. That’s nearly four times the amount of water vapor that scientists estimate the 1991 Mount Pinatubo eruption in the Philippines lofted into the stratosphere.
The height of the plume can reveal how much ice was sent into the stratosphere and where ash particles were released. The height is also critical for aviation safety because volcanic ash can cause jet engine failure.
The Tonga volcanic eruption created a plume of ash and water so strong it reached the mesosphere, about 50-80 km above Earth’s surface, where meteors and meteorites usually burn up.
Researchers seek to understand the impact the eruption might have on Earth's climate. Massive volcanic eruptions like Krakatoa and Mount Pinatubo typically cool Earth’s surface by ejecting gases, dust, and ash that reflect sunlight back into space. The Tonga volcano did not inject large amounts of aerosols into the stratosphere, and the huge amounts of water vapor from the eruption may have a small, temporary warming effect, since water vapor traps heat.
The eruption of Tonga-Hunga produced a 6-acre island in the Pacific Ocean. The new island is likely to disappear due to volcanic rock degradation caused by the erosion of the waves. According to NASA, islands created by submarine volcanoes are often short-lived, though they occasionally persist for years. For example, an island formed by a 12-day eruption from nearby Late'iki Volcano in 2020 washed away after two months, while an island created in 1995 by the same volcano remained for over two decades.
Related reading: NASA report: "Tonga Eruption Blasted Unprecedented Amount of Water Into Stratosphere"; Volcanic Eruptions and Climate
Posted by Alice C. Linsley at 1:07 PM No comments: