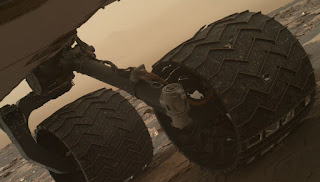 
NASA's newest Mars rover, Curiosity, is beginning to show wear and breakage on its solid aluminum wheels. Curiosity had driven 9.9 miles (16 kilometers) on Mars since its August 2012 landing. The rover is currently exploring a region known as Vera Rubin Ridge on a mountain known as Mount Sharp. Read more here.


Some History about the Mars Rovers

NASA had a huge database of information about Mars because of the rovers that have landed there to explore and take samples of the air, dirt and rocks. The rovers send images and climate reports back to NASA headquarters. At the moment, NASA has more data about Mars than it has about planet Earth.

Mariner 4 arrived at Mars on July 14, 1965 and passed within 6,118 miles of the planet's surface. It provided 22 close-up photos showing the red planet's cratered surface. The thin atmosphere was confirmed to be composed of carbon dioxide and a small magnetic field was detected.

Mariner 9 arrived at Mars on November 3, 1971 and was the first US spacecraft to enter an orbit around a planet other than Earth. A huge dust storm was in progress when Mariner 9 arrived at Mars and this delayed many of the scientific experiments. Mariner returned the first hi-resolution images of the moons Phobos and Deimos and confirmed river and channel like features.

The Mars Pathfinder delivered a stationary lander and a surface rover to the Red Planet on July 4, 1997. The six-wheel rover, named Sojourner, explored the area near the lander. The mission's primary objective was to demonstrate the feasibility of low-cost landings on the Martian surface.

The Phoenix Mars Lander landed on Mars on May 25, 2008. Phoenix was designed to study the history of water and habitability potential in the Martian arctic’s ice-rich soil. The solar-powered lander completed its three-month mission and kept working until sunlight waned two months later. The mission was officially ended in May 2010.