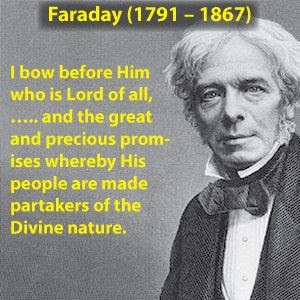 Michael Faraday's father, James Faraday, was a blacksmith from Yorkshire in the north of England. His mother, Margaret Hastwell, was the daughter of a farmer. Early in 1791 James and Margaret moved to Newington Butts, a village outside London. They already had two children, a boy Robert and a girl,  and Michael was born only a few months after their move on September 22, 1791.

The Farraday family were Sandemanians, a group of Protestants which had split from the Church of Scotland. The Sandemanians interpreted the Bible literally and this approach had a lasting influence on Michael. Faraday came to view the view the Bible as speaking about spiritual things whereas science explores material things. He did not see a conflict between the Bible and Science. His attitude was typical of many 19th century Christians in the sciences. The proper way to pursue science was a matter of great concern to him. He was very much a British empiricist.

The sciences that interested Faraady most involved magnetism, electricity, and chemistry. These are not explicitly mentioned in the Bible. He once said, “I will simply express my strong belief, that that point of self-education which consists in teaching the mind to resist its desires and inclinations, until they are proved to be right, is the most important of all, not only in things of natural philosophy, but in every department of daily life.”

In 1804, Michael served as an errand boy for the bookseller George Riebau. One of his tasks was to deliver newspapers. Faraday read many books during the seven years that he worked for Riebau. One work that captured his attention was Isaac Watts' The Improvement of the Mind.

Riebau wrote a letter in 1813 in which he described how Faraday spent his days as an apprentice (see for example:

After the regular hours of business, he was chiefly employed in drawing and copying from the Artist's Repository, a work published in numbers which he took in weekly. ... Dr Watts's Improvements of the mind was then read and frequently took in his pocket, when he went an early walk in the morning, visiting some other works of art or searching for some mineral or vegetable curiosity. ... His mind ever engaged, besides attending to bookbinding which he executed in a proper manner.


In October 1812, Faraday took a position as a bookbinder but still he hoped to become involved in science. He wrote to Humphry Davy, whose chemistry lectures he had attended. He sent, him copies of the notes he had taken at Davy's lectures. Davy arranged a meeting with Farraday and advised Faraday to keep working as a bookbinder, saying:

Science[is];a harsh mistress, and in a pecuniary point of view but poorly rewarding those who devote themselves to her service.

However, Faraday's fortune was about to turn. Davy's assistant lost his job for fighting and Davy invited Faraday to fill the empty post. In 1813 Faraday took up the position at the Royal Institution. He then had access to scientific equipment in a laboratory.

Faraday worked on chemistry until 1821 when he began experiments with electricity. He was interested in the work of some scientists in Paris, including Arago and Ampère, who established a relation between electricity and magnetism. Davy became interested in this and this provided Faraday the opportunity to work on the topic. Faraday published On some new electro-magnetical motions, and on the theory of magnetismin the Quarterly Journal of Science in October 1821. Pearce Williams writes:


It records the first conversion of electrical into mechanical energy. It also contained the first notion of the line of force.

The Christian message of Jesus as the Incarnate God was important to Faraday. This, of course, is the message of Christmas. Beginning in 1826, Faraday presented a series of six Christmas lectures for children at the Royal Institution, and continued to do so for the rest of his life. These lectures gave Faraday a venue in which he could discuss two things he loved: Christianity and science. 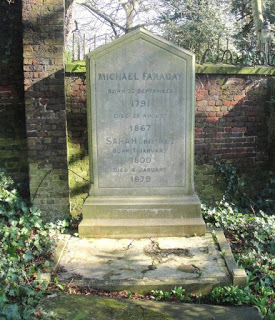