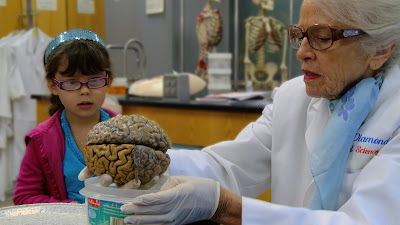 Marian Diamond, a pathbreaking neuroscientist whose research — including a study of Albert Einstein’s preserved brain — showed that the body’s three-pound seat of consciousness was a dynamic structure of beautiful complexity, capable of development even in old age, died July 25 at an assisted-living community in Oakland, Calif. She was 90.

A daughter, Ann Diamond, confirmed her death but did not know the cause.

Dr. Diamond, a professor emerita of integrative biology at the University of California at Berkeley, was for decades known on campus as the woman with the hat box. Inside the container, decorated on the outside with a floral print and carried by a bright blue string, was a preserved human brain.

It was the crucial prop for a lesson she spent a half century teaching: that the brain was, as she once wrote, “the most complex mass of protoplasm on this earth and, perhaps, in our galaxy.”