Digging Through the Trash Remnants of the Monolith of Silwan, a tomb dating to the time of Solomon's Temple. It was once thought to be the burial site of Solomon's Egyptian queen.


Archaeologists are interested in ancient trash heaps which they call "middens." They tirelessly shift through rubbish heaps to discover pieces of broken pottery (shards), fragments of bone, broken tools, and other castoffs. These finds reveal a great deal about the daily life of the local residents.

Very old trash heaps have been found dating to about 8000 BC in Turkey, at Jericho in Israel, and ancient manuscripts have been found at the dump in El-Bahnasa, Egypt. Another ancient landfill is being excavated on the eastern slopes of Jerusalem's "City of David" or the area know as Silwan. The trash found here tells archaeologists what life was like for people living in Jerusalem during the Early Roman Period (100 BC-100 AD). 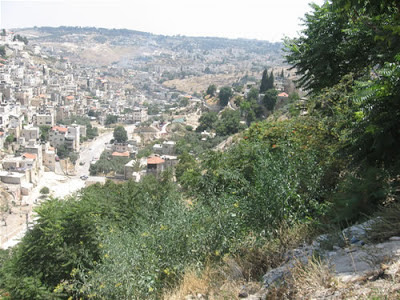 Looking south into the Kidron Valley from the southeast corner of the Temple Mount. Photo shows the Arab town of Silwan.


The trash digging at Silwan is under the direction of Tel Aviv University archaeologist Yuval Gadot. His team is bringing to light pieces of history when Jerusalem was under Roman rule, the Temple stood, and Jesus preached about the eternal kingdom and foretold His death and resurrection.

Godot reports that the garbage layers on Jerusalem's eastern slopes are more than 36 feet deep in some places. He explains that "the garbage layers could potentially shed light on the dietary habits, trading practices, and vocational diversity of the ancient residents of Jerusalem."

The huge scale of the dump suggests that Jerusalem had a trash collection system. The Jews were careful to avoid contact with human waste, urine, blood, bones, and dead animals. Likely, there was a caste of trash collectors who were regarded as necessary, but not respectable by Jewish ritual standards. In India, for example, trash collectors and street sweepers are the lowest caste and called "untouchables."