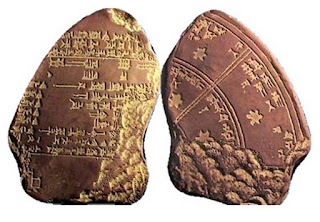 In the ancient world, priests were the wise men of learning. They were astronomers and medical practitioners.  They were scribes and accountants. Young men of the ruling class studied under these priests at famous shrines and temples. These were the "universities of the archaic world.

The priestly lines known as Horite Hebrew served rulers and were dispersed very widely. Some were serving rulers in the area of Lake Chad in central Africa some in Mesopotamia, some in southern Europe, and some in India. Plato recounts how the priests of the Nile had been keeping astronomical records for 10,000 years. He studied for 13 years in Memphis under a priest named Sechnuphis. Many Greek philosophers studied at Egyptian temple schools.

Iamblichus wrote that Thales of Miletus insisted that Pythagoras had to go to Memphis to study because the Egyptian priests were a great source of knowledge and wisdom, especially when it came to the natural sciences, medicine, and astronomy.

This recently recovered fragment of a circular star calendar from the library of King Ashurbanipal (668-627 BC) is an example of the relationship between the priest-astronomers and the King. This Babylonian star calendar was found in an underground library in Nineveh, Iraq.

By observing the heavens, ancient astronomers was able to understand that the stars and the planets move relative to one another in a fixed and stable pattern. There are seven visible planets and stars to the human eye, although all were called "stars" by the ancients. They included the Sun and the Moon. The seven celestial bodies were perceived as urns or bowls from which God poured forth both blessings and curses. In Revelation 16, the angels are instructed to go and pour out the seven bowls of divine indignation upon the earth.

According to the pre-Socratic philosopher, Heraklitus of Ephesus, these bowls carried the stars and other celestial bodies. Heraklitus received this idea from the Afro-Asiatics who explained the diurnal motion of the fixed stars as they revolved around a point above the north pole, and the apparent motions of the sun, the moon and planets.

Related reading: What is a Constellation?; Ancient African Astronomers; Who Were the Wise Men?; The Dung Beetle and Heavenly Lights; Seven Planets, Seven Bowls; Kepler: Celebrating God through Astronomy