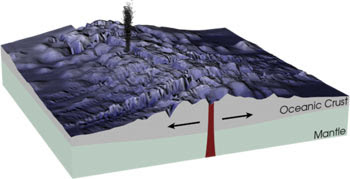 The Mid Atlantic Ridge has developed as a consequence of the divergent motion between the Eurasian and North American, and African and South American Plates. As the mantle rises towards the surface below the ridge the pressure is lowered (decompression) and the hot rock starts to partially melt. This produces basaltic volcanoes when an eruption occurs above the surface. An example is Eyjafjallajökull in Iceland.
As the plates move further apart new ocean lithosphere is formed at the ridge and the ocean basin gets wider. This process is known as “sea floor spreading” and results in a symmetrical alignment of the rocks of the ocean floor which get older with distance from the ridge crest.
Related reading: Rising Rock From Below the Atlantic Drives the Continents Apart; Dynamics of the Mid-Atlantic Ridge; The Ring of Fire; The Afar Rift; A New Ocean Forming in the Afar Region
Posted by Alice C. Linsley at 10:59 AM