A young teen who has a keen interest in the ancient Mayan culture and the stars has made a truly incredible discovery. William Gadoury has always been fascinated with ancient civilizations and in particular his imagination was captured by how they used to worship the stars. He found that all of the ancient Mayan cities matched up with the brightest stars in the sky. Using maps of the night sky, satellite images and even google maps he found that 117 Mayan cities perfectly matched up with the constellations we see in the night sky.

One constellation in particular was a little odd compared to the rest as it was made up of 3 stars but William could only find 2 cities to match up with it which led him to believe that there could be a hidden city still to be discovered.

Posted by Alice C. Linsley at 7:13 AM No comments:

Linguistics is the study of languages and their structures. Some branches of linguistics include:

Applied linguistics is the systematic study of language structure, how children acquire a language, how subsequent languages are acquired, the role of language in communication, and the status of language as the product of particular cultures and social groups: https://asa-cwis.blogspot.com/2016/09/what-is-phoneme.html

Dialectology is the study of the way sounds, words and grammatical forms vary within a language.

Psycholinguistics is the study of the psychological and neurobiological factors that enable humans to acquire, use, and understand language.

Sociolinguistics is the study of how language serves and is shaped by the social nature of human beings in their communities.

Historical-comparative linguistics is a branch of historical linguistics that is concerned with comparing languages in order to establish their historical relatedness. This branch is especially helpful to Bible scholars, biblical archaeologists, and biblical anthropologists who want to understand the relationship of the ancient Afro-Asiatic languages, the oldest known languages. Knowledge of ancient Afro-Asiatic languages helps them to understand ancient texts. Of special importance are Ancient Egyptian, Sumerian, Akkadian, Elamite, Arabic, and Hebrew.

Here are basic lexicons for 2 of those languages:

Posted by Alice C. Linsley at 3:04 PM No comments: 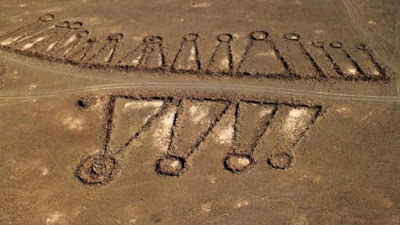 Mysterious keyhole structures at Al Wadi, in the Saudi Arabian desert, observed by archaeologist David Kennedy from a helicopter.


Three regions are named in the Bible as being rich in minerals like copper and gold: Havilah at the source of the Nile in Kush (Genesis 2:11); Dedan in southwestern Arabia, and Ophir, south of Dedan.

The region of Dedan and Ophir is riddled with lava caves dating to many thousands of years ago. The archaic populations of Dedan and Ophir lived in these caves and collected epithermal gold. This is gold that is mined close to the surface because it has been brought up by volcanism.

Scientists have been studying this area. They are especially interested in the lava caves of Harrat Khaybar. Here researchers have found hundreds of stone walls surrounding large basaltic lava fields. The largest of the walls reaches almost 1,700 feet long. The stone walls were built during active volcanism. The structures at Harrat Khaybar are regarded as “works of the old men” by the Bedouin. The Bible calls them the "mighty men of old." 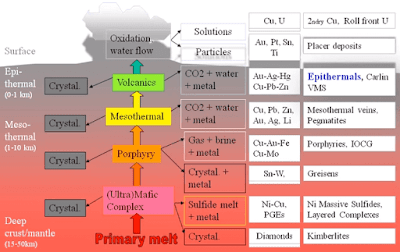 The lava caves and walls of Harrat Khaybar (Arabic for "White Mountain") are in the news today. Scientists have known about this region for 30 years. This is the region of biblical Dedan and Ophir, described as rich in precious metals. This is probably the oldest known site of recovery of copper and gold, and the miners lived in the caves, many of which collapsed long ago. Ophir was one the sons of Joktan (Gen. 10:26-28). The Joktanite clans still live in this region of Arabia.

This area of Saudi Arabia and Yemen is a site for porphyry copper and epithermal gold deposits captured by people living in the caves.

In 1946 an inscribed pottery shard was found at Tell Qasile (Tel Aviv) dating to the eight century BC. The Paleo-Hebrew inscription says, "gold of Ophir for Beth-Horon [...] 30 shekels." This, and other such finds, confirm that gold was exported from Ophir.

How Heavy Elements are Produced 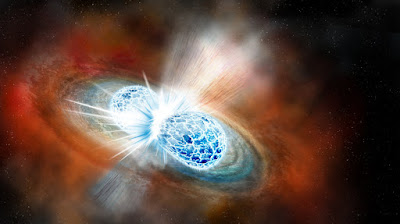 Monday's (Oct. 16) historic announcement of the detection of gravitational waves produced by two colliding neutron stars has provided explanation as to where in the elements heavier than iron are synthesized.

Until astrophysicists were able to observe the merger of two neutron stars, there only had theories about how heavy elements like gold, platinum and lead are created in the cosmos.

Neutron stars are the corpses of massive stars whose cores collapsed in supernova explosions. While they’re not that big, they’re incredibly dense, packing a sun’s worth of mass into the size of a city. A teaspoon of neutron-star stuff weighs around a billion or so tons.


Neutron stars contain some of the building blocks of atomic nuclei. If these neutrons are somehow released from a neutron star, they undergo reactions that allow them to stick together, creating elements heavier than iron. All of the post-iron elements are formed in these supernova explosions. So much energy is released during a supernova explosion that the freed energy and copious free neutrons streaming from the collapsing core drive massive fusion reactions, past the formation of iron.

Researchers are witnessing a distant heavy-element factory synthesizing "maybe hundreds of Earth masses' [worth] of gold and … maybe 500 Earth masses' worth of platinum," astrophysicist Daniel Kasen said in a new video.

Posted by Alice C. Linsley at 4:45 AM No comments:


Global warming is a hotly disputed topic. This article attempts to expose "myths" about global warming. Let's look at some of the myths.

* Earth has had many cycles of warming and cooling.
This isn't a myth. Earth's climate changes. The Sahara was once wet. Antarctica was home to a diverse range of tropical plants including Baobab trees, ferns, palms, and rainforest trees.

* Earth's climate is cooling.
This certainly is not true for recent history. The decade of 2000-2009 was the hottest on record.

* Weather records only go back to about 1900.
NASA bases climate change on a 136-year record. Records of weather were kept in England that go back to the 17th century.

The England and Wales Precipitation series, which measures rainfall and snow, goes back to 1766. The Central England Temperature series has kept weather records since 1659.


"They were kept on a personal basis by amateur meteorologists," says Sancha Lancaster, a spokeswoman for the Met Office. "We have an archive here of thousands of people's weather diaries. Many don't just record the weather, they also record the effects on wildlife and plants. It takes years to quality-control them and put the data on to a computer." (From here.)

Local weather records have been used to develop computer models that suggest global warming, at least in the Northern Hemisphere.

According to NASA, 16 of the 17 warmest years in the 136-year record all have occurred since 2001, with the exception of 1998. What happened to make 1998 different? This marked the completion of Earth's axial precession, a cycle of about 25,800 years (Earth's Great Year). We don't have records going back that far.

In the cycle of Earth’s Great Year the line off the North Pole axis (extending toward Polaris) scribes a complete circle in the heavens about every 25,800 years. A complete cycle takes between 25,000 and 28,000 years, depending on the amount of Earth's wobble. One cycle is Earth’s Great Year (also called a "Platonic Year.") Climate and atmospheric changes appear to become more acute toward the end and beginning of a new year.

*Global warming may have positive effects.
Regions of the Earth, such as Greenland, may benefit from an extended growing season. Other regions may see an expansion of deserts, though many factors contribute to desertification.

Posted by Alice C. Linsley at 4:59 AM No comments:


The disease, called adrenoleukodystrophy (ALD) is an extremely rare degenerative disorder that affects about 1 in 20,000 people worldwide, virtually all of whom are boys. Boys with ALD are unable to make a protein that helps break down certain fatty acids, causing their nerve cells to die and neurological function to rapidly deteriorate.

In the new study, published online Oct. 4 in The New England Journal of Medicine, Eichler and his team treated 17 boys ages 17 or younger with a single dose of the experimental gene therapy. When the researchers followed up on the boys two years later, 15 were functioning without any major disability or progression of their disease. The other two had died, one from a worsening of the disease and the other from complications of a donor transplant he got after he withdrew from the study.

For the gene therapy, the children had their own stem cells harvested from their blood rather than bone marrow. Then, scientists used a unique tool to infuse the cells in a lab with the healthy ABCD1 gene: a lentivirus made from a disabled form of HIV. The lentivirus acts as a "vector," carrying and inserting the healthy gene into the stem cell DNA.

"These vectors are kind of like living medicines," said Dr. David Williams, the chief scientific officer at Boston Children's Hospital and the senior author of the study. Once in the body, these altered blood stem cells constantly regenerate to keep treating the patient's disease. The advantage of using disabled HIV over other viral carriers is that HIV actually delivers the healthy gene more safely, without apparently altering any neighboring DNA, Williams told Live Science.

A new kind of atomic clock is more precise than any yet built, with the ability to tick smoothly for a thousand times the lifetime of the universe. In addition to being the best timekeeper to date, the new so-called quantum gas clock might one day offer insights into new physics.

Researchers at JILA (formerly also referred to as the Joint Institute for Laboratory Astrophysics) used a combination of strontium atoms and an array of laser beams to create a clock so precise it might be able to measure the interaction of gravity at smaller scales than ever before. In doing so, it might shed light on the nature of its relationship to other fundamental forces, a mystery that has baffled physicists for decades.

Atomic clocks measure time by using the vibrations of atoms like a very precise metronome. Current atomic clocks are off by seconds over tens of billions of years. This newest iteration stays precise enough that it will be off by only 1 second over about 90 billion years. [5 of the Most Precise Clocks Ever Made]

The clock can measure seconds down to 1 part in trillions.


In experiments, self-folding, heat-activated origami suits created for robots could help the machines walk, roll, sail and glide, according to the new study.

"Imagine future applications for space exploration, where you could send a single robot with a stack of exoskeletons to Mars," study co-author Shuguang Li, a postdoctoral fellow at MIT's Computer Science and Artificial Intelligence Laboratory, said in a statement"The robot could then perform different tasks by wearing different outfits." [Super-Intelligent Machines: 7 Robotic Futures]

Read more here.
Posted by Alice C. Linsley at 10:13 AM No comments: